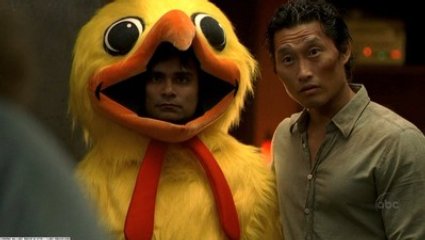 What we don’t know: Geez, that list would be so long … ugh … what’s the point … but I’ll focus on newer things introduced

Oh, and good call by Joshua on the Jin talking. Sorry I doubted you (it shan’t happen again). This show is proving to provide a multitude of layers of meaning. I particularly noticed the extreme difference in leadership styles between the tail-end of the plane vs. the mid-section. Whereas Jack can sometimes be harsh or unemotional, he is also compassionate and logical. Instead of not listening to Hurley’s suggestion of just allowing everyone to enjoy the food while they could, he put his trust in Hurley. Contrast that with Anna Rosa (who seems to the leader of the others) where she brutally man-handles and seemingly intimidates those around her into doing what she wants (regardless if its for the greater good or not). The manner in which she achieves the goals (thus far) compared to Jack are interesting. Leaders who are thugs create thugs. Leaders who trust, create trust. It also touches on the way in which power changes you and the people around you. Hurley won the lottery but holds the winning ticket for for days in fear of the impending change it will bring not only to his life, but those around him. He will be seen differently. People will want what he says. They’ll be jealous, envious, hurt. The power of money. The implied result of Hurley winning the lottery is that he loses his friends; thrown aside and chiseled apart for what he has rather than who he is. The same can be said for Anna Rosa. In crisis, or change, she seems to have grabbed power and used to for her benefit — transforming those around her.

Perhaps it can be attributed to something else, but at the moment the glimpse we got of her and the tail-end survivors was specifically contrasted with mid-section survivors. Hurley. Anna Rosa. Leadership.